From the very beginning, the goal of the Bombastic StarLeague was to focus on developing the talent of players outside of South-Korea. We believe that you can only dedicate yourself when you have a consistent way of testing yourself! That’s why our plan for 2022 is to create THREE Seasons of BSL:

Thanks to our sponsors and crowdfunding, we already have funds for the prize pool and production of BSL14, as well as a big part of the prize pool of BSL15! All we need to do is meet the donation goals during the streams and we will have three BSL Seasons this year!

Let’s introduce our new sponsor:
OptiMonk's founder was an avid Hungarian StarCraft player in the early 2000s (nickname: Cameleon). Now they are building marketing solutions for small businesses, with more than 40,000 customers. They believe that every brand deserves the best tools to compete against the Amazons of the world.

Let’s thank our wonderful sponsors for enabling us to have BSL14 and most certainly BSL15! We are still looking for sponsors for BSL16, so spread the word!

But now hold onto your seats, because we prepared an incredible year for you, with many exciting changes!

In addition to cash rewards, BSL seasons 14 and 15 award participants Bombastic Points, which will later be used to determine 16 of the 32 players seeded into BSL16.

How do I qualify for each division? (CHANGES AHEAD!) 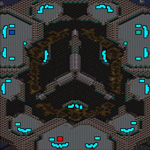 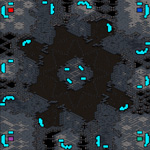 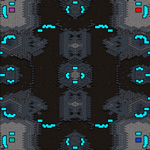 Bombastic Points will be awarded throughout BSL seasons 14 & 15 based on rankings. These points will then be used to determine the 16 players seeded into the BSL16 2022 Championship. 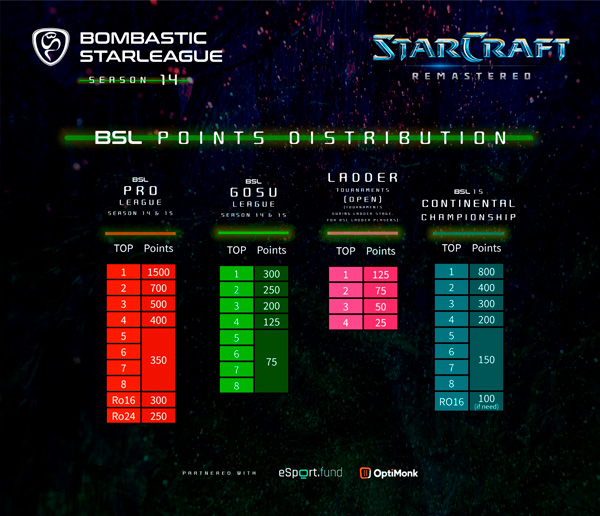 4. The tournament is residency locked
The goal of the Bombastic StarLeague is to focus on the development of players outside of Korea. Therefore, only players that are living outside of South Korea can participate in this tournament.

5. Smurfs
a) Everyone can add up to FIVE BSL14-accounts on bombasticstarleague.com. Highest placed account will appear on the ranking. Using multiple accounts on the BSL website is not allowed. If you want to merge your accounts, please contact admins on Discord. Penalty for breaking this rule is a BAN for the BSL Season.
b) Sharing accounts is not allowed - one battle.net account can be used by one player only.

6. Racepicking
Upon confirming their participation, players need to declare race and matchups they play for the entire season.

7. Regular match rules
Players must be online and available on Battle.net channel Op BSL (Europe) 15 minutes before their scheduled match. Secondary channel of communication is BSL Discord server.
15 minutes after scheduled time, if one of the players not responding, his opponent may claim a technical win for one game.
15 minutes after that he can claim a win for the whole series.
It is not allowed to livestream your games or announce the result before they have been officially casted.

8. Playing matches before the schedule
Every match prior to the Elimination Stage can be played ahead of schedule if both players and admins agree.
Contact your opponent and set up the date to play. We strongly suggest using BSL Discord for this so admins can keep track of things.
On the selected day, play your match. Apply the same rules as for a regular match - use Op BSL and Discord to communicate.
If both players were unable to play on their selected date/time or weren't able to set one up, match should be played as it was scheduled.
It is not allowed to livestream your games or announce the result if you are playing your match earlier.
Winner of the match must upload the replays to the admins.

15. Personal data
Anyone who is participating in the tournament agree to the processing of their personal data, which they made available to the organizer or which are accessible publicly.