The long-awaited, sixteenth edition of Bombastic StarLeague (BSL) kicks off on the 20th November 2022. During every season of BSL, our goal is to create a healthy competitive environment for players outside of South Korea. Each season we try to raise the bar higher and higher, so that the level of production and organization of the tournament meets the expectations of the most sophisticated StarCraft gourmets.

The BSL16 will be split into four separate skill-based divisions, catering to the needs of both experienced players and newcomers to the scene alike. The four levels of competition are the BSL ChoboLeague, BSL HasuLeague, BSL GosuLeague and BSL ProLeague.

We’d like to thank the community for the support we’ve received over the past few seasons and we hope the fruits of our labor will once again live up to everyone’s expectations.

In the BSL14 Announcement we informed you that this was our plan for BSL in 2022!

It’s time to launch the most important BSL Season of the entire 2022 year. “click”.

Of course it wouldn’t be possible for us to come back with another season without the support of our sponsors and generosity of you guys, our incredible StarCraft Remastered community!

Big thanks to all of you guys, for enabling us to have yet another season of Bombastic StarLeague! It wouldn’t be possible without your help and support!

But now hold onto your seats, because we prepared an incredible season for you!

After the ladder stage is done, confirm your participation on BSL Discord -> #Confirm-participation 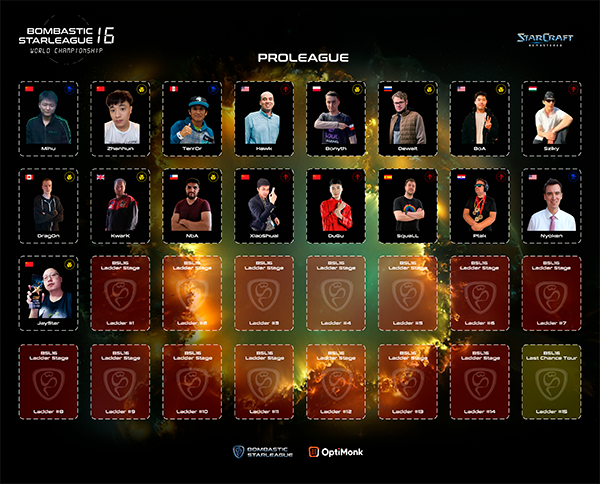 Continue improving your BSL16 Ladder placement even after being qualified - the player with the higher ladder placement will be given priority during map vetoes in Ro8 and forward. 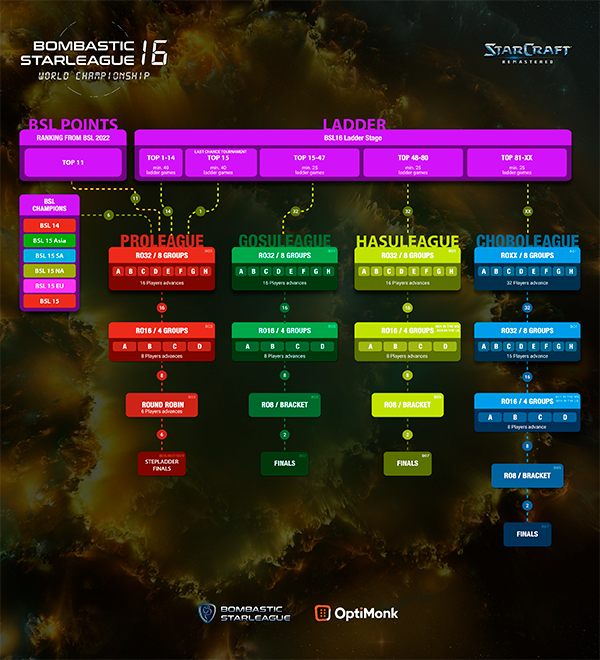 RESTREAMING or STREAMING the EVENT without permission is NOT ALLOWED, our goal is to maximize viewers on the official BSL channels, as we’re trying to attract some sponsors. 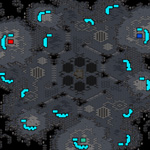 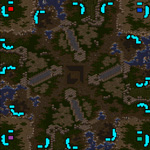 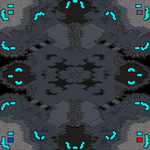 RO8 Map Picks
All matches during the RO8 Round Robin are bo3. All vetoes and map picks need to be made before the matches. The player with the higher ladder stage ranking can decide if they want to veto first or second. The order for vetoes is ABAB ABC for BO3 and AB ABABC for BO5.

Grand Finals
After picking the first 7 maps, each player picks one map (as repeat) to play the 8th and 9th match on.

If you want to help us spread the news that BSL Season 16 started, here is a graphics pack which you can use during your stream or on your social media. Thank you <3

We reserve the right to change schedules if necessary.

4. The tournament is residency locked
The goal of the Bombastic StarLeague is to focus on the development of players outside of Korea. Therefore, only players that are living outside of South Korea can participate in this tournament

5. Smurfs
a) Everyone can add up to FIVE BSL15-accounts on bombasticstarleague.com. Highest placed account will appear on the ranking. Using multiple accounts on the BSL website is not allowed. If you want to merge your accounts, please contact admins on Discord. Penalty for breaking this rule is a BAN for the BSL Season. b) Sharing accounts is not allowed - one battle.net account can be used by one player only.

6. Race Picking
Upon confirming their participation, players need to declare race and matchups they play for the entire season.

7. Regular match rules
Players must be online and available on Battle.net channel Op BSL (Europe) 15 minutes before their scheduled match. Secondary channel of communication is the BSL Open Discord server - players have to be available on Discord during the matches.
15 minutes after scheduled time, if one of the players is not responding, his opponent may claim a technical win for one game.
15 minutes after that he can claim a win for the whole series.
It is not allowed to livestream your games or announce the result before they have been officially casted.

8. Playing matches before the schedule
Every match prior to the Elimination Stage can be played ahead of schedule if both players and admins agree.
Contact your opponent and set up the date to play. We strongly suggest using BSL Open Discord for this so admins can keep track of things.
On the selected day, play your match. Apply the same rules as for a regular match - use Op BSL and Discord to communicate.
If both players were unable to play on their selected date/time or weren't able to set one up, the match should be played at the official play date and time.
Both players must ensure that the replays are uploaded and available for the admins.

15. Personal Data
Anyone who is participating in the tournament agrees to the processing of their personal data, which they made available to the organizer or which are accessible publicly.